A government shutdown that drags on for a month or longer could trigger a 20% to 30% correction in the market, Barry Ritholtz said in an interview with Yahoo Finance.

The U.S. is kicking off its second week of a partial shutdown, and the heated rhetoric spewing from politicians on both sides of the aisle doesn’t bode well for the chances of a speedy compromise. (Indeed, things were so hunger-inducing in Washington, D.C. on Friday that President Barack Obama and Vice President Joe Biden walked over to a nearby shop for hearty sandwiches.) 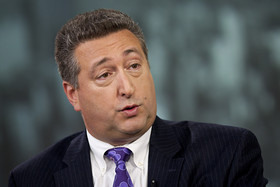 After three or four weeks, the shutdown would “take a big chunk” out of gross domestic product, chip away an consumer confidence and “really have an impact on earnings,” Ritholtz said. “Earnings are at a very high cyclical level,” he said in an interview posted Friday. “And if we do anything to damage that, you risk a 20% to 30% correction in the market if this goes on for a month or longer,” he said.

The S&P 500  SPX and Dow Jones Industrial Average  DJIA both posted  losses for the week ended Friday, the second weekly decline in a row. Read: Shutdown threatens to overshadow earnings

By Ritholtz’s calculations, Congress has roughly until November before stocks take a deep hit. That’s well after Oct. 17, the deadline for Congress to raise the debt limit. A failure to raise the debt limit by that date would mean the U.S. won’t be able to borrow money to pay its bills, which would trigger a default, Treasury Secretary Jack Lew has said.

While most investors don’t see a U.S. default as a likely scenario, Ritholtz said he thinks the U.S. won’t technically default even if Congress fails to raise the debt ceiling.

“All the U.S. obligations are money good,” he said, adding that the Treasury Department could continue to “move stuff around” to temporarily avoid hitting the limit.

“We really don’t care about any of the stuff that’s going on in D.C.,” he said. “Our view is as long as this is resolved in a week or three, it’ll be okay.” Late into the third week of a shutdown, he said the firm would look at hedges and lightening up.

A look back at the last 17 defaults and each was “a teeny little squiggle you can barely see on a chart,” he said.

This site uses Akismet to reduce spam. Learn how your comment data is processed.